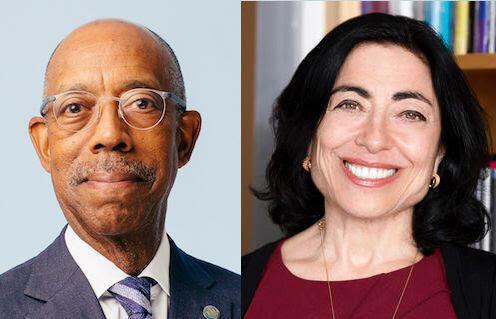 We’re excited that the Harvard Data Science Review (HDSR), an award-winning journal and a leading voice for data science, is spotlighting the UC Berkeley Division of Computing, Data Science, and Society (CDSS) and its leadership of data science at Berkeley and throughout the UC system.

This issue of HDSR examines our work from a variety of different perspectives, giving a comprehensive look into all things data science at Berkeley. It also provides valuable insight into how this field—one that’s rapidly transforming science, business, civic, and daily life—is coming into its own.

First, there’s a wide-ranging conversation between HDSR Founding Editor in Chief Xiao-li Meng, President Michael Drake of the University of California system, and UC Berkeley Associate Provost Jennifer Chayes. Originally conducted in January of this year, it explores the role of data in society, what the UC System is doing in the area of data science education, and how it fits into our larger purpose as California’s premier public higher educational institution.

In the interview, President Drake underscored the importance of values and equity as a key part of the mission of data science at the University of California. “…There’s a line in the play Hamilton, a song called “In the Room Where It Happened”...There are places where decisions are made that change us and society as we go forward. And power in the 18th century meant sitting around the table where those decisions were being made so that you could influence that future…When we're all in those rooms and those things are happening, I just want to make sure that social equity is in those rooms as well, that we bring that to those discussions and to the work that we're doing. So that would be something I'd ask for data science.”

Next, in Data Science and computing at UC Berkeley, Jennifer Chayes lays out CDSS’s pioneering vision and progress in building a university-wide entity for data science and computing to address the opportunities and challenges of our timesThe article includes a discussion of Associate Provost Chayes’s thoughts by three deans of UC Irvine’s Donald Bren School of Information and Computer Sciences: founding dean Debra Richardson, former dean and present UC Irvine provost Hal Stern, and current dean Marios Papaefthymiou. There are also three other discussion pieces written by leaders of other institutions. (These rejoinder pieces will be made available later in May.)

Writing about the larger frame for CDSS, Chayes states, “With a human-centered approach to data science and computing, we will be able to better frame the perspective and purpose and to anticipate the problems, in this new medium. But we will also need tremendous innovation in the core of computing and statistics to move the field dramatically forward, to address the most difficult technical challenges and threats, and to realize the greatest opportunities.”

But there’s more: Professor Michael Jordan of EECS co-authored Interleaving Computational and Inferential Thinking: Data Science for Undergraduates at Berkeley with Ani Adhikari of Statistics and John DeNero of EECS. It explores the thinking behind the undergraduate data science curriculum and its far-reaching effects in reshaping the undergraduate experience at Berkeley.

Launched in 2019, HDSR, which is published by the MIT Press, is a leading journal whose goal is to provide authoritative but accessible peer-reviewed content to define and shape data science as a scientifically rigorous and globally impactful multidisciplinary field. Earlier this year, it won the 2021 Professional and Scholarly Excellence (PROSE) Award for best new journal in science, technology, and medicine from the Association of American Publishers.

Explore the issue here and sign up for the HDSR newsletter to keep tuned to the fast-moving area of data science and its growing influence on society and humanity.