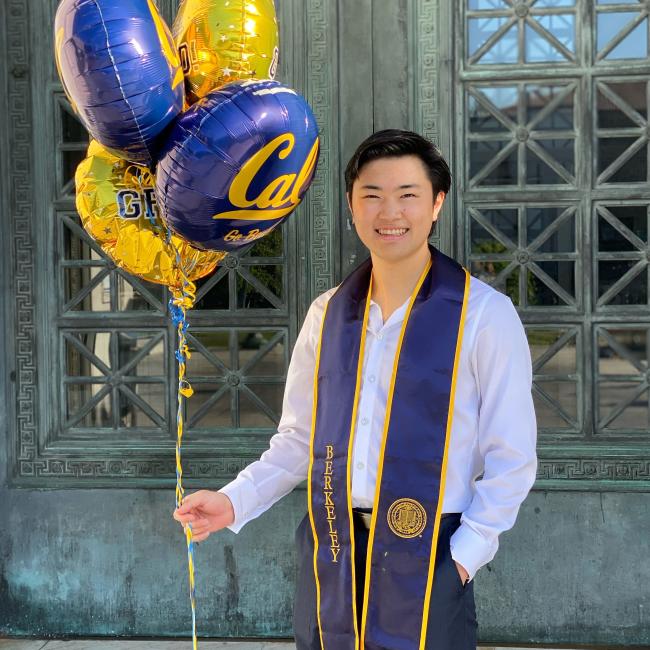 Alex played an active role in the Division of Computing, Data Science, and Society (CDSS); he developed pedagogical materials for the Division's Modules program and then went on to join the Global Adoption team, which promotes national data science education growth. He received his bachelor’s degree in data science this year and is starting a career in sports analytics.

Question: How did you become interested in data science?

Answer: Data science became a new major in Fall 2018. I was drawn to the idea of being able to take more classes outside of just computer science, along with devoting myself to reaching a more specific concentration of study. I landed on a “Cognition” domain emphasis, specializing in neurological and psychological aspects of data. It was in the major where I found my passions in democratizing education for all students and public health research. The major also provided me with the technical competency to begin my journey into the sports analytics world.

Q: How were you participating in data science at Berkeley and/or in the community?

After taking several of the introductory classes in the major, I really resonated with the open culture of making the education very accessible to people of all majors on campus.

I had the privilege of joining a group of other peers who felt the same way in developing a curriculum in the Division's Modules program, which is where I got my start in developing pedagogical materials, both as a developer and a team lead. That initial experience also provided a chance to learn about the national scale of a growing movement in undergraduate data science education. In my junior year, I switched to a new team at the Division solely focused on developing relationships with other universities and helping to create an open curriculum on the Berkeley campus that other universities could adopt and learn from in creating curriculums and programs in data science. During my time on that team, we grew from a small and lean team of 3 students to double that today. As of this past semester, there are over 40 instances (and growing) of new universities (and K-12 schools!) using Berkeley's Data 8/Data 100 materials in some form or capacity. While I am sad to no longer be the leader for this team, I am so excited to see the amazing work that the team does each semester.

Q: How do you envision using data science in your future career?

A: I have recently begun a career in the sports industry as a software developer for the Los Angeles Clippers basketball front office. While still in its infant stages, the cross-section of sports and technology lends itself to the high potential for innovation. One of the tenants of this intersection lies deep within the world of sports analytics. I am confident that my time as a Data Science Major will be useful in helping to find new strategies for players and teams to win more games.

Q: Any advice for students curious about data science?

My advice for new students to the field is to always keep an open mind as to how you see being conscious about data is affecting the topics you care about. Seeing how data science is being deployed in areas such as ethical research, education, sports, and others will make more advanced and difficult concepts more enjoyable to learn!