Hani Gomez, Ph.D.: Computing Pedagogy at the Nexus of Technology and Social Justice 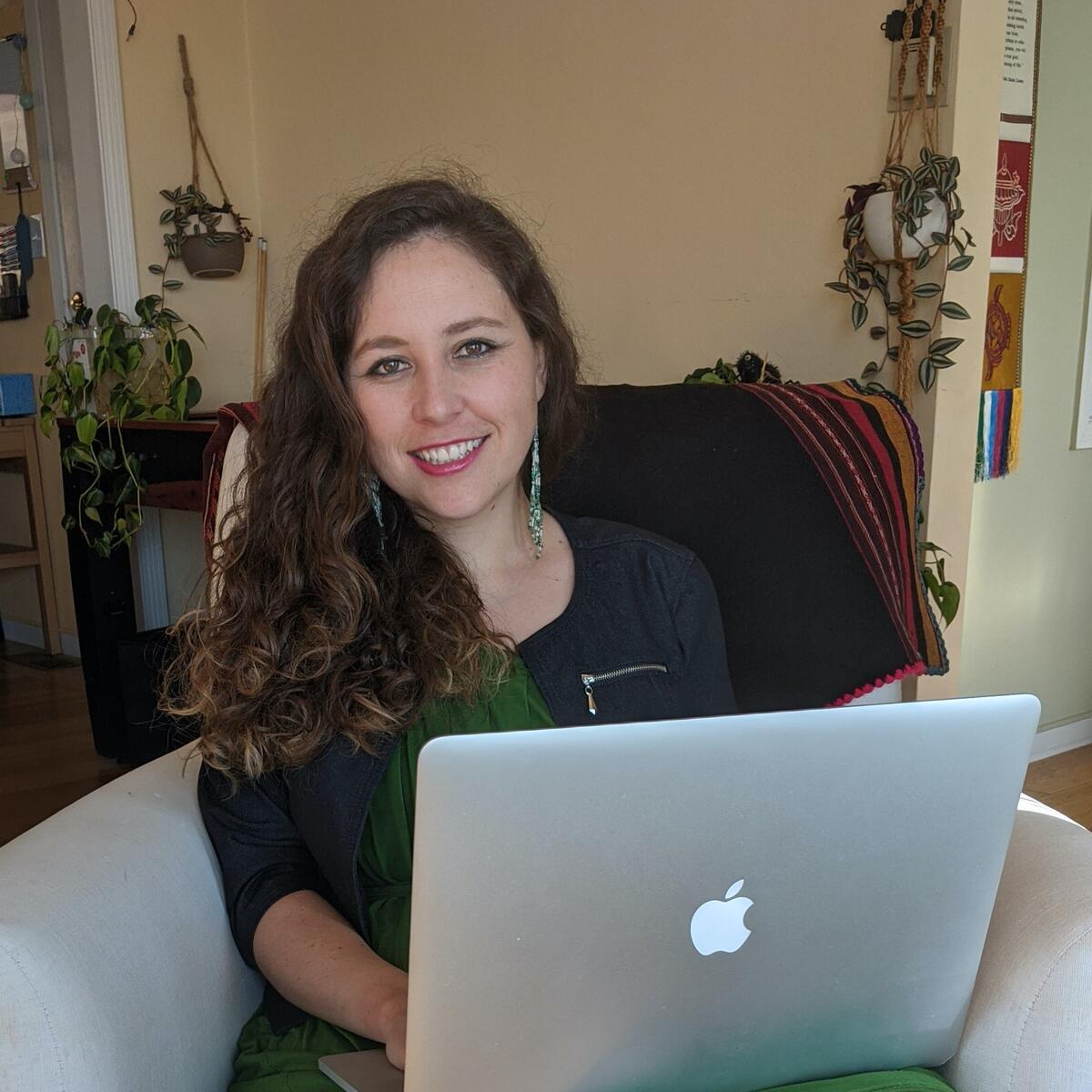 As an electrical engineering Ph.D. student at UC Berkeley, Hani Gomez specialized in microrobotics, often working in clean rooms designed to keep out dirt and dust. But over the course of her five years of study, she became increasingly interested in a part of academia that’s not so precise nor neat and tidy -- implicit bias, racism and their effects on the university and broader community.

Three years into her studies, she amped up her involvement in 2018 with Bias Busters, an organization in the College of Engineering run by graduate students, faculty and staff to address implicit bias issues. Pre-pandemic, the group organized a speaker series, developed training for teachers and spoke about the issue on campus and at other institutions and conferences, culminating in a presentation at a conference of electrical engineering department chairs at universities on the west coast.

Then the pandemic hit. While she was able to work from her home in El Cerrito, Gomez knew this was a privilege many workers were denied, and many of them were from underrepresented groups. The police shootings of Breonna Taylor and George Floyd in the first half of 2020 brought tens of thousands of people into the streets of cities around the world to demonstrate that Black Lives Matter.

“All of a sudden, a lot of things started happening,” Gomez said, “I became even more passionate about social justice.”

After receiving her doctoral degree in December 2020, Gomez found herself in an interesting position. She had applied for various post-doc positions, including one in microbotics at UCLA, and finished her dissertation. “It was time to figure out what to do and I wondered what a post-doc position combining pedagogy, social justice and technology would look like,” Gomez said.

Advised by computer science professor John Canny and historian of science Cathryn Carson of the Human Contexts and Ethics program in the Division of Computing, Data Science, and Society at Berkeley, Gomez merged social justice and technology into a post-doc research position. She met both of the professors through Bias Busters. In particular, one meeting with Carson helped guide her to the decision.

Gomez and Carson were members of a group helping to develop a course on social justice in the Department of Electrical Engineering and Computer Sciences (EECS) that was piloted in the spring 2020 semester. Titled “EECS for All: Social Justice in EECS,” the class will be taught by Canny in the coming semester. The group met regularly on Thursdays and on last Thanksgiving Day, Gomez decided to log in and see if anyone else was there. Carson was the only other attendee.

“I had met her in the group meetings, but it was really nice to interact with her at length,” Gomez said. “The more we talked, the more I thought this is really cool work we’re doing and how can I keep doing it?”

That conversation led to a post-doctoral position split evenly between computer science and the HCE program. While her Ph.D. work immersed her in engineering and the technical community, HCE gave her an added perspective based in the social sciences, Gomez said.

“The HCE team provides great community support and valuable guidance,” Gomez said. “I’ve learned so much as a member of the team, and I am very thankful for the opportunity.”

Gomez is on the advisory committee for the new course and was one of three presenters in a June 15 workshop on “Towards Social Justice in the Data Science Classroom,” organized by Berkeley’s Human Contexts and Ethics program.

Although technology is often seen as a solution, Gomez advised attendees to avoid the idea of “tech solutionism ”-- remembering that it can perpetuate social issues and has a long history of being used for oppression, including when the Nazis used census data to identify Jews during the Holocaust. Nor is technology morally neutral, as many think, Gomez said. Decisions made in the design of new technologies can overlook biases or transfer them.

She is also a member of the EECS Anti-Racism Committee, the name of which is explicit by design. “A lot of faculty are involved and it wouldn’t have happened without them,” Gomez said. “We also have critical support from four great students  -- Gloria Tumushabe, Liya Mulugeta, Devin Guillory and Matthew Anderson. They help set an agenda every week and bring up issues to help the committee understand how to implement anti-racism pedagogy and efforts across the curriculum, courses, outreach programs and recruitment efforts.”

Gomez credits her close friends Regina Eckert, co-founder of Bias Busters, and Carlos Biaou, an EECS graduate student, with pushing the department to take action on racism. Biaou was president of the Black Graduate Engineering and Science Students Association from 2017-19. He won the Pillar of the Community Award from the Latino/a Association for Graduate Students in Engineering and Science at Berkeley in 2019 "for his commitment to building community across organizations on campus."

“I want to be more like Carlos,” Gomez said. “He’s an amazing leader and I have seen him and three other students who organized weekly meetings achieve so much in this department.”

One project is to look more closely at the relevant statistics for EECS. For example, 20 percent of the students may be women, but that is the aggregate and does not consider the intersectionality of students' experiences, Gomez said.

“When we do that, we are likely to find that the statistics are even more isolating,” she said. There may be 20 percent women, but how many of them are women of color or from other marginalized communities? We want to implement anti-racist practices in order to help create a better experience for students in EECS, specifically those who are commonly marginalized in the field and in academia."

The long road to Berkeley

Gomez was born in Cochabamba, Bolivia, growing up there with her younger sister and mother. Originally from Oneonta in upstate New York, her mother received a Rotary Club exchange student scholarship to study in Bolivia and fell in love with the country and the people. After earning her college degree in art back in New York, Gomez’s mother moved back to Bolivia and got a teaching position in a Bolivian-American school.

Although her father passed away when she was young, Gomez is still connected to his side of her family and calls them “one of the most precious gifts he gave me.” Another gift from her family is her first name, which is how Bolivians pronounced her mother’s given name of Holly.

At age 18, she decided to attend college in the United States, opting to study at the State University of New York, Oneonta, where she could stay with her grandparents. She planned to major in physics and fashion design, but one winter in New York -- the worst in 10 years -- persuaded her to look at other schools. Another factor was that the school didn’t have an engineering program. She settled on the University of South Carolina where a friend was studying, 800 miles south from New York winters. “It was one of the biggest risks I took, but I quickly connected with the research,” she said. After earning her bachelor’s degree in electrical engineering, she was looking at graduate schools when she was invited to visit Berkeley through the Berkeley Edge Conference.

The invitation-only program is for graduate students who are competitively eligible for master’s and Ph.D. programs in mathematical and physical science and supports participating students as they prepare applications for graduate study and fellowships.

“I would never have applied if not for the Berkeley Edge Conference program,” Gomez said of the meeting, which included meetings with professors. “It was very useful -- I had no idea what I was doing.”

It was at the Berkeley Edge Conference that she met her Ph.D. advisor-to-be, Kristofer Pister, and learned about microrobotics. Prospective students received advice on applying, offers to read those applications in advance, information on scholarships and encouragement. She ended up applying for grad school at five institutions -- Berkeley, University of South Carolina, Georgia Tech, North Carolina State University and the University of Colorado, Boulder -- and was accepted by all of them.

She decided on Berkeley for a variety of reasons, including its strong academic reputation and location, but the Berkeley Edge Conference program convinced her the campus was a more comfortable, more approachable school. “Berkeley was my dream school,” she said.

Although the Berkeley Edge Conference has been on hiatus, it will return this fall as an online program Friday-Saturday, Oct. 15-16. Learn more about the program and how to apply.

In addition to earning her Ph.D, Gomez said she came out of Berkeley realizing “the more you learn, the more you realize how little you do know, especially when it comes to anti-racism.”

As she figures out the next steps of her career, Gomez said she plans to continue working to abolish racism both professionally and personally. For example, working towards eliminating a culture of perfectionism that she feels is predominant within white supremacy culture.

“The idea is that you don’t do anything unless you do it right, which doesn’t leave room to learn from your mistakes,” Gomez said. “You need to give yourself room to learn or unlearn, to grow and relearn.”

This attitude harms everyone, Gomez said, as it leads to defensiveness when people don’t live up to expectations.

“I’ve learned that we have to try to give ourselves grace and to also hold ourselves accountable,” Gomez said. “It’s a really tricky balance.”