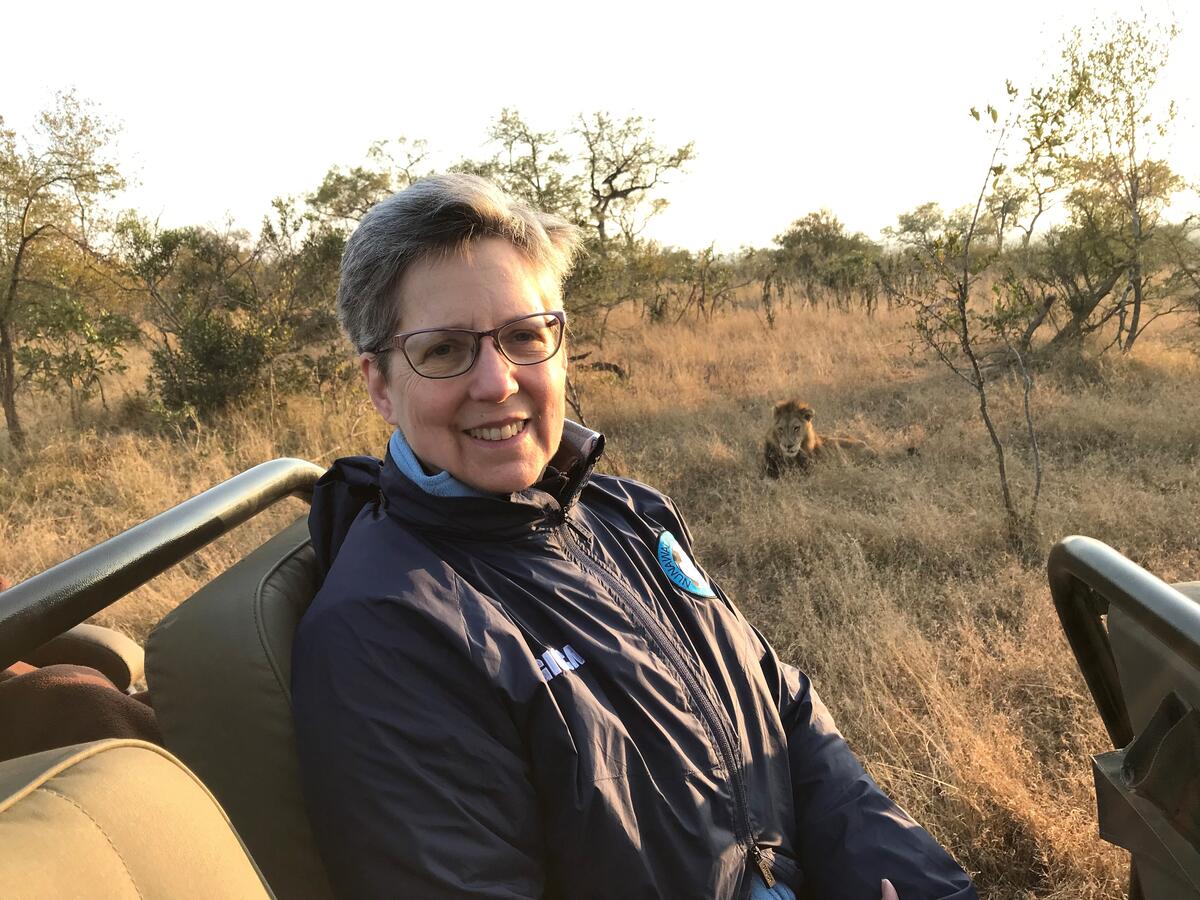 Deb Nolan on a 2018 safari at Sabi Sands Game Preserve in South Africa, an activity she plans to continue in retirement.

This time around, Deb Nolan is definitely going through with her plans to retire.

She had been planning to go out in June 2020. In preparation she was taking a class in landscape horticulture at Merritt College in Oakland, with plans to do some serious gardening in retirement.

Instead, she was asked to stay on as the Associate Dean for Undergraduate Education in the nascent Division of Computing, Data Science, and Society (CDSS) by Jennifer Chayes, the then-newly hired Associate Provost for CDSS. So instead of continuing to learn the Latin names for landscaping plants, Nolan withdrew from the class -- the first biology course she had ever taken --- and agreed to stay on at Berkeley.

“It was a fantastic opportunity and so exciting,” Nolan said. “I could apply my decades of experience to innovate in education and administration and build something new here in data science.”

Nolan likened the new position to when she and her husband remodeled their house several years ago. They did away with the things they didn’t like, though they had endured them for years, and created a new space with new features of their own choosing. “It was an opportunity to think differently about the whole learning environment, to remodel education for the new field of data science,” she said.

Among the projects Nolan worked on was the development of a new pedagogy course. Rather than having a single class, the Data Science Undergraduate Studies (DSUS) program plans to create a succession of classes, each building on the previous one. Pedagogy has been central to Nolan’s work on campus since she joined Berkeley as a professor in the Statistics Department in 1986. She also launched a new DSUS internship program.

Additionally, Nolan worked to develop a new communications requirement for the Data Science major, an aspect of data science that is very important to her. Several years ago, she applied for an Art of Writing Seminar Fellowship to teach a class in writing about statistics and co-designed the class with Sara Stoudt, then a Ph.D. student in statistics at Berkeley. In addition to developing the class, Nolan and Stoudt co-authored "Communicating with Data: The Art of Writing for Data Science," a book published in March 2021 by the Oxford University Press.

“I am deeply grateful to Deb for her leadership in the Data Science Undergraduate Studies -- she has done so much in only a year and a half!,” wrote Chayes in announcing Nolan’s retirement and the appointment of EECS Professor John DeNero as CDSS’ next Associate Dean for Undergraduate Studies. “I have also relied on Deb for her wise counsel in areas well beyond DSUS. As many of you know, Deb has made tremendous contributions to the campus over her 30-plus- year career at Berkeley, including her contributions as a Statistics Professor and Department Chair, Associate Dean for Math and Physical Sciences, and campus leader on many initiatives.”

In addition to her role as associate dean, she continues to teach and holds the Zaffaroni Family Chair in Undergraduate Education. Nolan was awarded the Berkeley Distinguished Teaching Award for excellence in teaching and is noted for working with and encouraging all students in STEM. She helped design the Data Science major and developed and taught Principles and Techniques of Data Science (Data 100). She has created and led programs to encourage students to pursue their education in STEM, including the Summer Math Institute (1991-97), Explorations in Statistics Research (2005-12), CalTeach (2006-20), and Berkeley Unboxing Data Science (started in 2020).

Administratively, Nolan has served twice as chair of the Statistics Department, as Associate Dean for Math and Physical Sciences for nine years. She has also found time to author five books during her time on campus.

“But she loves teaching and doesn’t give up on teaching,” said Statistics Professor Bin Yu, who also came to Berkeley in 1986. “She goes out of her way to help students and is extremely helpful and empathetic, whether showing up at a student’s home with groceries or buying a student new clothes for a job interview.

“She has really devoted herself with tireless service to her department and division,” Yu said.

Asked what she is proudest of in her career, Nolan first says that’s like asking a mother which child is her favorite.

“But I think I’m most proud of turning the traditional way of teaching statistics on its head to deeply engage students in real-world problems first, instead of just lecturing about theory,” she said. “I love that creative aspect of teaching, whether it's designing fun probability problems that have an Aha!-moment, or unpacking a complex theoretical topic to get at the fundamentals, or drawing connections across topics. I just love teaching.”

That was not the case in one of her early introductions to the field, as she recalled in a 2015 interview: “After graduating from college, I worked for IBM as an applications programmer. My responsibilities included assisting a market research team with their customer data. I learned SAS and helped massage the data into a form the market research cats (that's what we called them) could analyze. Unfortunately, they thought you could simply hand the data over to the computer and it would do everything, including figuring out what type of analysis was appropriate to carry out. This was the same issue that had cropped up in college when I spent one summer at Vassar…”

“I have great admiration and respect for Deb’s career-long achievements and in particular, I really appreciate that she promoted question- and data-driven statistical education and statistical computing long-before they became popular,” said  Sandrine Dudoit, the current Statistic chair. “Deb has become a role model for me and an example of academia at its best.”

Nolan took a leave of absence from IBM to attend graduate school in Statistics, intending to go back to the job. But after earning her Ph.D. from Yale, one of her professors told her it was easier to go from academia to business, rather than from business to academia. So she applied for teaching positions and came out to interview at Berkeley.

“I had never been to California and I flew out from the east coast in February,” she said. “I stepped off the plane and could smell blossoms in the air. It seemed like paradise.”

She got the job -- the first woman hired as a Statistics professor since Betty Scott joined the math department in 1951. “It was incredible as I joined these giants in the field -- Peter Bickel, Leo Breiman, Kjell Doksum and Chuck Stone -- whose books I had read and influenced my career,” Nolan said. “It was humbling.”

Nolan was a co-developer of the program now known as Data Science Undergraduate Studies. She helped develop one of the key courses for the major, Data 100, which is the bridge from Data 8 to upper division classes.

At the time, she was in her second turn as chair of Statistics and was a member of a multidisciplinary task force that figured out the structure of the major, developed the proposal for campus, and planned the staffing. The two data courses would be jointly taught by instructors from Statistics and EECS. The program has soared in popularity.

On May 15, the third Data Science undergraduate cohort will graduate 668 majors, with another 369 undergrads minoring in Data Science. In 2019, the first year the degree was awarded, the class comprised just 82 graduates.

On to Retirement, Mostly

Nolan already has several trips in mind for her retirement. In September, she and her husband will travel to Gilbertsville in upstate New York, where they will meet two friends from high school to carry on a tradition they began while undergrads. Nolan and six high school friends each chipped in $1,000 to buy a piece of land and build a log cabin.

The idea was it would help them keep in touch with each other and give them a place to meet. They cut down the trees, shaved off the bark and built a cabin that they still use. Nolan was the only woman in the group, which included her then-high school sweetheart and now her husband.

Looking farther afield, she has her eye on a three-week safari in Botswana. She’s gone on several already and is looking forward to the next one. Her favorite animals to see are the leopards, the giraffes and the elephants.

But, like many UC retirees, her retirement won’t be full time and she will work on specific projects for CDSS. That Nolan isn’t really slowing down doesn’t surprise Dudoit.

“When I think of Deb, the French expression ‘force tranquille’ comes to mind, which could translate as tranquil and steady strength,” Dudoit said. “Deb is a remarkably competent, dedicated, effective, and experienced leader who approaches everything she does with calm, generosity, humility, and level-headedness. She will put others first and advocate for those with less of a voice, rather than seek the spotlight for herself. I look forward to seeing what’s in store next for such an energetic and youthful emerita!”