Join us on October 14, 2022 from 12pm-1:30pm Pacific for an Authors Meet Critics panel on Keeping It Unreal: Comics and Black Queer Fantasy (NYU Press, 2022), by Darieck Scott, Professor of African American Studies at UC Berkeley. Professor Scott will be joined in conversation by Ula Taylor, Professor & 1960 Chair of Undergraduate Education in the UC Berkeley Department of African-American Studies and African Diaspora; and Scott Bukatman, Professor of Film and Media Studies in the Stanford University Department of Art & Art History. The panel will be moderated by Greg Niemeyer, Professor of Media Innovation, Toban Fellow, Director of the Art Practice Graduate Program at UC Berkeley.

Characters like Black Panther, Storm, Luke Cage, Miles Morales, and Black Lightning are part of a growing cohort of black superheroes on TV and in film. Though comic books are often derided as naïve and childish, these larger-than-life superheroes demonstrate how this genre can serve as the catalyst for engaging the Black radical imagination.

Darieck Scott offers a rich meditation on the relationship between fantasy and reality, and between the imagination and being, as he weaves his personal recollections of his encounters with superhero comics with interpretive readings of figures like the Black Panther and Blade, as well as theorists such as Frantz Fanon, Eve Sedgwick, Leo Bersani, Saidiya Hartman, and Gore Vidal. Keeping It Unreal represents an in-depth theoretical consideration of the intersections of superhero comics, Blackness, and queerness, and draws on a variety of fields of inquiry.

Reading new life into Afrofuturist traditions and fantasy genres, Darieck Scott seeks to rescue the role of fantasy and the fantastic to challenge, revoke, and expand our assumptions about what is normal, real, and markedly human.

Darieck Scott is a professor of African American Studies at UC Berkeley. In addition to Keeping It Unreal: Black Queer Fantasy and Superhero Comics, Scott authored Extravagant Abjection: Blackness, Power, and Sexuality in the African American Literary Imagination (NYU Press 2010), which was the winner of the 2011 Alan Bray Memorial Prize for Queer Studies of the Modern Language Association.

Ula Taylor earned her doctorate in American History from UC Santa Barbara. She is the author of The Promise of Patriarchy: Women and the Nation of Islam, The Veiled Garvey: The Life and Times of Amy Jacques Garvey, co-author of Panther: A Pictorial History of the Black Panther Party and The Story Behind the Film and co-editor of Black California Dreamin: The Crisis of California African American Communities.

Scott Bukatman is Professor of Film and Media Studies at Stanford University. His work explores the ways popular forms mediate between new technologies and human perceptual and bodily experience. His books include Terminal Identity: The Virtual Subject in Postmodern Science Fiction, Hellboy's World: Comics and Monsters on the Margins and, most recently, Black Panther (University of Texas Press).

Greg Niemeyer (moderator) is a data artist and Professor of Media Innovation in the Department of Art Practice at UC Berkeley. He is the former director and co-founder of the Berkeley Center for New Media. Niemeyer's work is data-driven: large datasets and data streams are raw materials for visual and sonic experiences. His work theorizes data as mirrors, reflecting to us what we don't see about our essential resources (air, water, care) from novel points of view. These patterns hold the hope that we can learn something new about what is to come and that we can evolve from the impossible present to more possible futures. 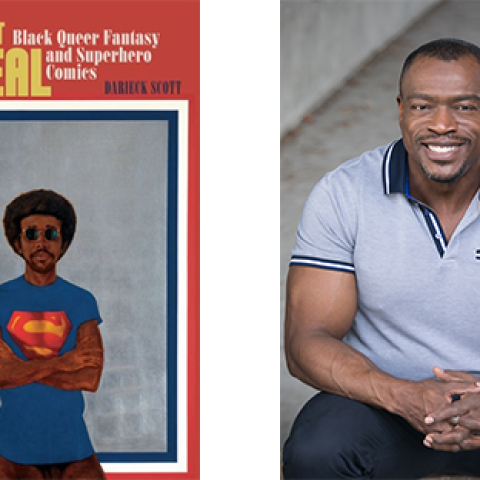