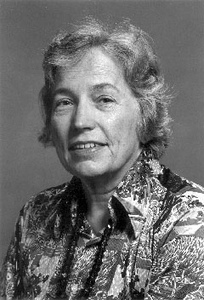 Note: This story was compiled from online sources including Calisphere, Wikipedia, Amazon, and a review of Equivalence: Elizabeth L. Scott at Berkeley, a biography written by Amanda Golbeck, who earned her master's degree under Scott.

By the time Elizabeth “Betty” Scott became the first female professor in the Statistics Department at UC Berkeley in 1962, she had already made quite a name for herself. Although she joined the mathematics faculty at Berkeley in 1951, she had actually earned her Ph.D. in astronomy, her first love.

In 1957, she identified a bias in the observation of galaxy clusters, realizing that distant clusters could only be found if they contained brighter-than-normal galaxies, as well as a large number of galaxies. She submitted a formula to correct for what became known as the Scott effect. She wrote 42 research papers on astronomy; her 13th one, written in 1948 with Jerzy Neyman, was her first statistical treatise.

Elizabeth Leonard Scott was born in Oklahoma in 1917 and moved to Berkeley with her family when she was four so her father could attend law school. Known as Betty, Scott earned her bachelor's and doctorate degrees in astronomy at Berkeley, but seeing that the field was essentially closed to women at the time, she chose mathematics as her academic career path.

Her statistics career began during World War II when she was employed at the Statistical Laboratory that Neyman had just started at Berkeley. Her work furthered the war effort, mostly concerned with improving the precision of air bombing. Their collaboration across a wide range of disciplines, from skin cancer to insect populations, continued until Neyman died in 1981.

During the 1960s, Scott combined her research and advocacy skills to address social issues, such as fundraising for Martin Luther King Jr.'s civil rights movement and raising bail for students arrested during the Free Speech Movement.

In the early 1970s, Scott applied her expertise in statistics to analyze career patterns of men and women in academia, documenting discrimination affecting the advancement of women graduate students and women faculty. She then set to work fighting this issue. She was co-chair, with Elizabeth Colson of Anthropology, of a special committee set up by the Academic Senate to study the status of women on campus.

Scott organized the collection of data showing the discrepancy between the availability and proportion of women hired at each level in the University, from majors to graduate school and from graduate school to the professoriate in each department. The resulting report was reprinted by the U.S. Congress in the report “Discrimination against Women” and widely used in the early 1970s as a model for study of possible discriminatory patterns based on sex and ethnicity at other universities.

For a national multi-university study sponsored by the Carnegie Commission, Scott created “the AAUP kit” (for the American Association of University Professors), a set of guidelines for constructing and using a regression model to flag possible cases of wage discrimination. The criteria she developed, published by the commission in 1973, were used by a number of universities, including Berkeley, to provide salary adjustments to temporarily remedy inequities. In the late 1970s, Scott was asked to serve as a consultant to a committee appointed by the American Anthropological Association to examine patterns of hiring and advancement of men and women within anthropology. She worked closely with that committee for several years, while also helping other academic groups.

In addition to her excellence in research, Scott was a superb teacher who cared deeply about her students. She single-handedly ran the statistics master's program for about 15 years, and, in her last seven years alone, she supervised the theses of 11 Ph.D. students. She also co-chaired the biostatistics program for over 16 years.

She devoted a great deal of time to various campus committees and played a prominent role in the design and maintenance of Evans Hall, where statistics is presently housed. Members of the department used to joke that, “Betty owned Evans Hall."

Scott was a Fellow of the Institute of Mathematical Statistics. The Committee of Presidents of Statistical Societies awards a prize in her honor, the Elizabeth L. Scott Award, for "fostering opportunities in statistics for women."

Elizabeth Leonard Scott died in 1988 at age 71. In her memory, the Elizabeth Scott Fund was established on campus the following year and awards a scientific book and a citation "to the M.A. student in the Statistics Department showing the greatest promise in statistical research." The award web page notes that, "Starting out in the 1930s in a university that was almost entirely bereft of women role models, Scott worked tirelessly and determinedly for equal opportunities and equal awards for women in academia. It is no exaggeration to say that today many women owe their position in academia as equal partners among men to Scott's commitment to this cause and her outstanding achievements, as an academic, polemic, warrior, and friend."