Although shelter-in-place rules in Berkeley and across the country caused people to shut down their travel plans, the restrictions also led to a wide-open welcome to educators interested in attending UC Berkeley's third annual National Data Science Education Workshop. And the effects are still rippling out around the state and across the country.

In the past, the five-day workshop drew 70-80 attendees, a number limited by meeting space. But with the meeting moving to cyberspace, the 2020 edition drew more than 500 registered attendees.

"It was really grassroots," said Anthony Suen, director of programs for the Data Science Education Program and co-organizer of the June 22-26 event. "We were able to make it much more inclusive."

Just as the Data Science Education Program (DSEP) emerged from a bottom-up approach to create what's now known at the "Berkeley model" for teaching data science (and which has taken hold at dozens of universities and colleges), this year's conference allowed lots of time for discussion as to how other institutions were setting up their programs.

“While the primary focus of DSEP is aimed at increasing the data literacy of Berkeley students, it has also become clear that our trailblazing in this area can help other schools implement their own programs,” said Deborah Nolan, CDSS Associate Dean for Undergraduate Education. “The National Data Workshop is one way for all participating schools to learn from one another.”

"What we tried to do this year was not just have a program to show what Berkeley's doing, but to organize panels so we could hear what others are doing," Van Dusen said. "We heard from institutions across the U.S., throughout California, and from community colleges as well."

One focus has been on the historically black colleges and universities, or HBCUs, a group of higher education institutions primarily serving the Black community, and 30 of which were represented at the conference. 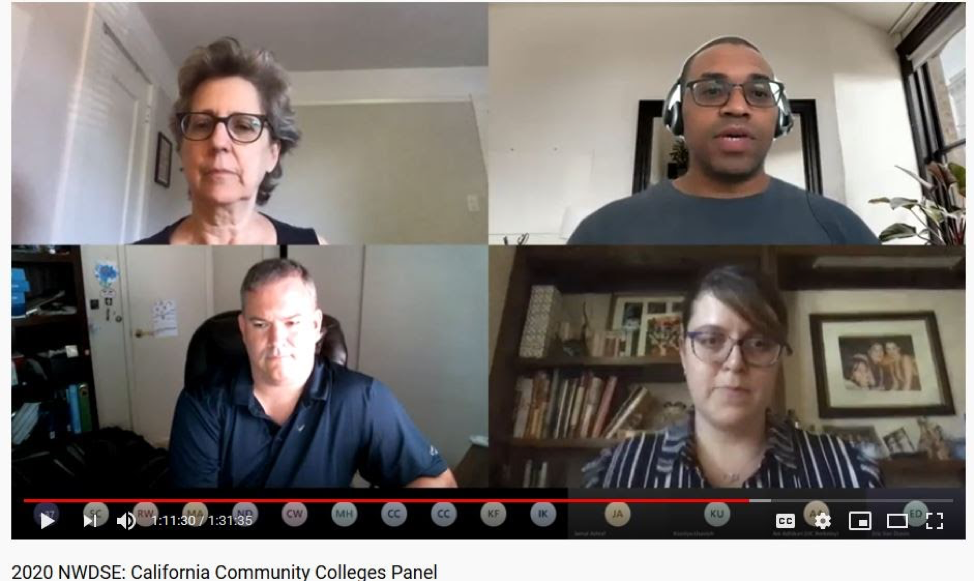 On July 28, Van Dusen followed up on the workshop with faculty attendees from Clark Atlanta University, Morehouse College, Morehouse School of Medicine, and Spelman College, known collectively as the Atlanta University Center Consortium, the oldest and largest association of historically Black colleges and universities. About 20 representatives from the schools registered for this year's workshop, nearly twice as many as in the past.

Jerry Volcy, the Brown-Simmons Professor of Computer Science and Director of the Innovation Lab at Spelman College, said that when the four affiliated universities were looking to start a data science initiative, they visited a number of schools around the country, but didn't find a model that fit them until "We ended up at Berkeley and agreed 'This is the program we want to adopt.' "

We want to raise the data literacy of every student," Volcy said. "There's a growing recognition that data literacy is increasingly important and it's no longer just a competitive advantage when choosing a career, but it's becoming a requirement.

Spelman, which traces its roots to a school launched in 1881 to educate young Black women, held its first data science class this summer; a six-week mini-course to test modules to be used in the pilot course in the spring semester. That class is based on Berkeley's Data 8 course.

"It went really well," Volcy said, adding that students began to appreciate the role of data in their lives as they discussed topics ranging from clearly biased search results to the cost of using a "free" education platform which collected their names, school, the course title, etc. "The topics fostered dialog, which led to debate and more awareness of the need for data literacy."

After the class ended, one student came up to him and said she wanted to change her major to computer science based on what she learned. While the ultimate goal is to have all of Spelman's 2,100 students take a data course, Volcy said the school wants to make the class "so valuable and so enjoyable that we will drum up demand for it, rather than requiring students to take it."

Spreading the wealth of data science in the Golden State

Solomon Russell, a computer science professor at El Camino College, a 21,000 student college in Torrance, presented as a member of both panels. He first saw the Data 8 course material a little more than a year ago and said to himself "We really, really need to bring this to El Camino.” Next spring, he plans to do just that, fully expecting to teach the class online due to the pandemic.

Russell does have experience in teaching another El Camino class based on a Berkeley course, the Beauty and Joy of Computing, aimed at introducing non-majors to computer science. The course material took some adapting for community college students but is now offered every semester.

Bill Kerney, a computer science professor at 13,000-student Clovis Community College near Fresno, also spoke as part of the community college panel at the workshop but talked about the challenges of creating such a class. "The biggest issue for me is the articulation and whether our students will get credit for the class if they transfer to a UC," Kerney said. It's complicated, he added, because each UC campus has different policies.

Kerney will soon make a formal proposal to create such a class, which could be introduced in the fall 2021 semester if all goes well. He's motivated on two levels.

I'm pro anything that will help our students get a job, and there's a huge job market in data science," Kerney said. "And as a computer science guy I'm excited because it will give me a chance to learn things I haven't learned before.

All of this is in keeping with the original motivation behind the Data 8 class and helping other schools adapt the approach as needed.

"We want to create this army of students around the world to solve the world's problems through data science," Suen said.