UC Berkeley’s Data Science education program reached new heights in 2016 and is poised for further growth in 2017. Approximately 500 students enrolled in the entry-level course, Foundations of Data Science, and hundreds more in connector courses spanning topics ranging from neuroscience to media studies. Below are highlights from a semester that helped establish a model for refining and extending the curriculum to a broader spectrum of students and adding advanced classes in coming semesters. 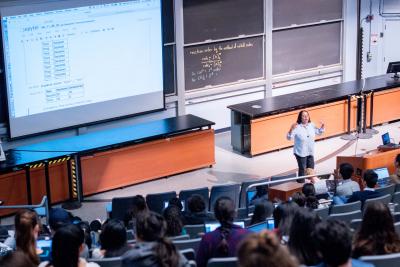 Drawing 500 students from 56 different majors, the core Foundations of Data Science course introduced data science to a wide swath of students across the campus. Designed for freshmen and sophomores of all majors, Foundations of Data Science (familiarly called Data 8) teaches core computational and inferential concepts while enabling students to work constructively with real data. Students work on projects such as analyzing water use in California and identifying musical genres based on data analysis of song lyrics.

Starting from Data 8, rather than from advanced classes, has let Berkeley build its data science curriculum from the ground up.

“All students should have access to a course that develops data literacy, so that they can use modern data analysis as an approach to any problem or investigation that they encounter in any discipline,” said Ani Adhikari, a professor of statistics who taught the course this fall and was one of several faculty who worked together across departments to develop it.

The faculty are excited that starting the data science curriculum at the entry level may help create a “pipeline” and culture that is diverse and inclusive. Based on a survey completed by 504 students in the class this fall, more than half are women, 22% consider themselves members of an underrepresented ethnic or racial group, and more than half have little or no computer programming experience.
The mix of students has yielded a rich learning experience for students and faculty alike, according to John DeNero, a professor of computer science who also helped to develop the course and will teach it again this spring.

“We’ve had strong engagement from students in literature, history, ethnic studies, areas that aren’t traditionally seen as related to Data Science—since today, studying any of these fields will also involve computing with data,” said DeNero. 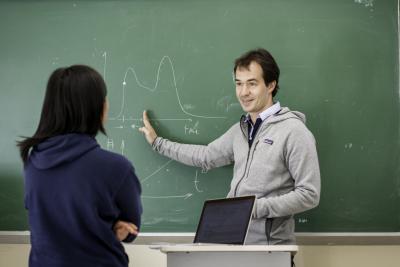 Connector courses offered in coordination with Data 8 bring data science approaches directly into the experience of students in many majors, enabling them to use these skills later in their studies. They also typically offer a smaller and more focused learning experience for students. This fall, a dozen connectors were offered in fields of study ranging from neuroscience to demography, from “smart cities” to child development.

Connector instructors from departments across campus say that the courses have provided valuable learning for students and faculty alike.

“It has been great engaging Berkeley undergrads and encouraging them to think about ethics, values, and what is fundamentally human about data. Pushing students to broaden their ideas around data, where it comes from, and how it makes a difference—sometimes good, sometimes bad—in the world is key to cultivating an ethical and humane future for data science,” said Anna Hoffman of the School of Information and instructor for Data and Ethics. 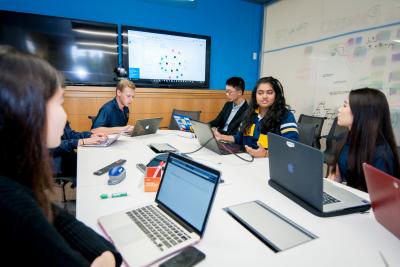 Student organizers partnered with the Data Science Initiative and the D-Lab this fall to initiate the Data Scholars program, a community providing a welcoming environment and support resources to underrepresented students taking Foundations of Data Science.

“The whole goal of this course is to make data science as accessible as possible to students of many majors and backgrounds,” said Luis Macias, a senior American Studies major who helped launch the Data Scholars program. “Data Scholars is an extension of that, and we want to be proactive about making sure there’s not a diversity problem in data science at Berkeley.” 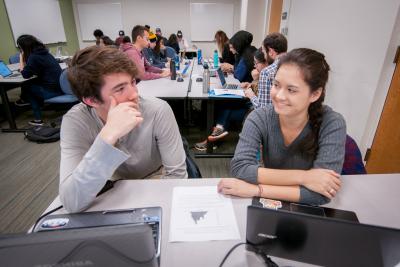 Foundations of Data Science students collaborating in one of the new lab spaces.

Inexpensive renovations in three instructional lab spaces in the summer of 2016 have provided full-time space for Foundations and connector labs and office hours. Each lab includes about 30 seats, clustered into groups around shared table space so that students can collaborate together on homework and projects.

In Spring 2017, the campus’ data science curriculum will continue to expand, a highlight being the launch of three new advanced courses that that take Foundations of Data Science as prerequisite. In addition, several new connector courses will be offered, including a history course in which students will use digital sources to explore the dark history of Japanese-American internment during World War II.

This news item was updated on Jan. 10, 2017. For updated information about Berkeley's data science plans, please see below.

Berkeley’s leadership also recently affirmed the campus’ commitment to data science. In December, campus leaders announced the establishment of a new Division of Data Science and in January, an internal search was launched for an interim dean of the new division. This spring, faculty plan to start drawing together proposals for data science major and minor programs of study, which will need to be approved by the colleges and the Academic Senate.