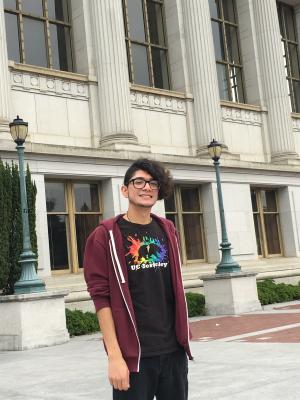 This fall the Data Science Initiative and the D-Lab partnered with student organizers to initiate the Data Scholars program, a community providing a welcoming environment and support resources to underrepresented students taking Foundations of Data Science (Data 8), Berkeley’s lower-division course for students of all intended majors.

One of the driving forces behind the program is senior American Studies major Luis Macias, who took the Foundations course last fall. Macias hasn’t forgotten the challenges he faced when he arrived at Berkeley as a first-generation college student from a low-income background in Southeast Los Angeles, where he attended an under-performing public school. At Berkeley, he has taken science and math courses alongside peers who had studied in some of the top high schools in the country.
“Sometimes underrepresented students feel like ‘I’m the only one’ and that loneliness can  produce a lot of anxiety,” said Macias, an American Studies major. “You can feel like an impostor.”
In the Foundations of Data Science course, Macias was moved by the opportunity to use data to create data visualizations about income inequality in California, and discovered the potential for data to create an impact for the issues and communities he cares about.
For Data Scholars this fall, drop-in sessions are held three times a week in the D-Lab, and are led by Macias and experienced tutors. Macias said the sessions serve as both a “homework party” and a supportive community for like-minded students. About eight to fifteen students attend on a regular basis, and a larger group of about 38 students have expressed interest.
The Data Scholars program draws from a successful model established in computer science (CS Scholars Program) and previously, in biology (Biology Scholars). The CS Scholars’ first cohort was 60% female, 30% underrepresented minorities, and 58% first-generation college students. Its results in its first year were impressive: the cohort had a 100% completion rate for the introductory computer science course CS 61A (compared to 87% for the class overall) and maintained a higher GPA overall than the general class. 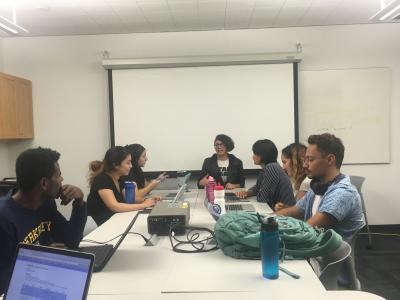 Claudia von Vacano, Executive Director of the Social Sciences D-Lab, said that her organization hosts and supports the Data Scholars program as part of its long-standing commitment to making data-intensive research and teaching more accessible and welcoming to a diverse swath of the campus community. The D-Lab offers classes, services, support, and a venue for research design and experimentation in data-intensive social sciences. Its programs include a summer internship program that provides research mentorship to underrepresented minority undergraduates.

“As a queer Latina, and as an immigrant who came to the United States as a political refugee, I have experienced first hand the barriers to entry into the academy generally and specifically within data intensive social science,” said von Vacano.

Statistics Professor Ani Adhikari, who is teaching the Foundations of Data Science course this fall, said she strongly supports the program because diversity of students is an essential element in Berkeley’s data science program.

“Their presence will matter in the future,” she said. “Who gets to decide what data will be studied, and what kinds of questions are asked of the data? This group has to be as broad as possible, to bring in a range of perspectives.”

A survey of students in this fall’s Foundations of Data Science class shows that more than half are women, and 22 percent percent describe themselves as coming from underrepresented racial or ethnic groups.

“The whole goal of this course is to make data science as accessible as possible to students of many majors and backgrounds,” Macias said. “Data Scholars is an extension of that, and we want to be proactive about making sure there’s not a diversity problem in data science at Berkeley.”

The program is slated to continue in the future and will expand to include support for additional courses beyond the Foundations course.

“Ideally we hope that the current Data Scholars will become the next generation of lab assistants and GSIs, and become a visible part of Berkeley’s data science community,” Macias said.