Are Distancing Measures Worth the Sacrifice? See for yourself.

How much difference does closing schools make in limiting the spread of COVID-19? How about border restrictions? Stay-at-home orders?

A group of researchers from Berkeley, Georgia Tech, and University of Illinois have built an app to help explore these questions. COVIDVIS enables users to look at the interplay of these and other interventions and the number of reported COVID-19 cases and deaths.

The idea is to illustrate the relative potential benefits of the various distancing measures that have been keeping us from work, school, friends, and travel, said Aditya Parameswaran, one of COVIDVIS’ creators and an assistant professor at the School of Information and Electrical Engineering and Computer Sciences.  “We know that different states and different regions and different countries are enacting different kinds of interventions, and one of the central questions that’s on everyone’s mind is: ‘What’s the impact of these types of interventions?’” 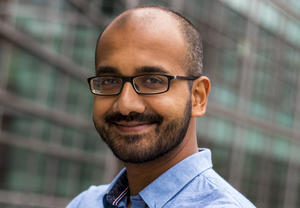 One of the central questions that’s on everyone’s mind is: ‘What’s the impact of these types of interventions?’

The tool visualizes when different measures were enacted in relation to both the number of confirmed cases and deaths and the number of days since the first cases were confirmed. It shows these numbers after these interventions were put in place, along with a simple linear trajectory showing what the number of cases might have been absent any intervention. In other words, it shows the extent to which various interventions are associated with flattening the curve.

A comparison of the states of New York and California, for instance, shows that California enacted stay-at-home measures earlier than New York both in terms of cases (952 vs. 15,800) and days since the first 20 cases were identified (9 vs. 12). The results seem to suggest that a few days can make a critical difference: California’s curve got flatter faster. 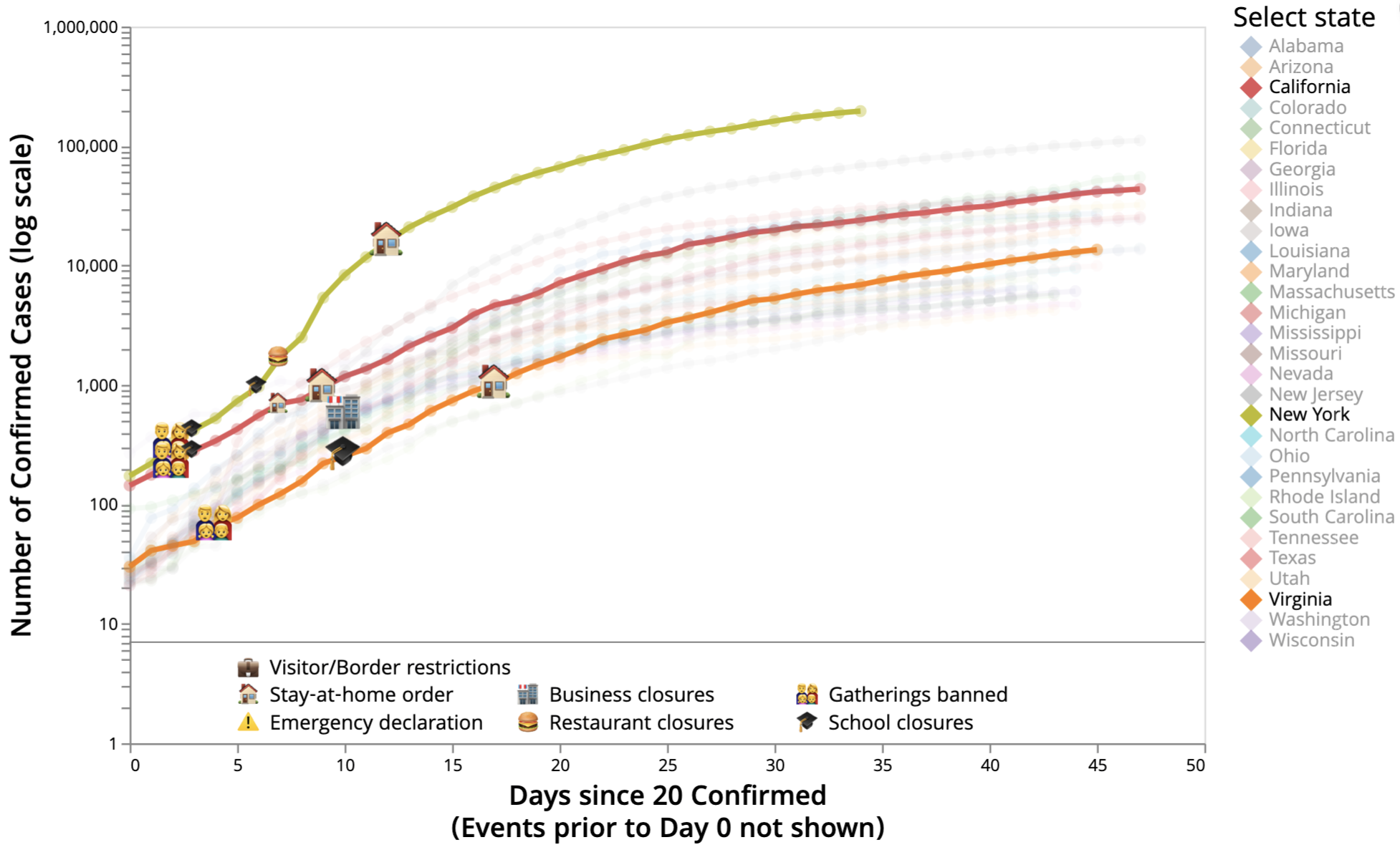 COVIDVIS looks at seven interventions: school, restaurant, and business closures; border restrictions; emergency declarations; banning gatherings; and stay-at-home orders. It uses different symbols to indicate when the restrictions were made on a regional or statewide basis.

Parameswaran cautions that the tool is meant to be used to look back at what seems to have worked or what hasn’t, not to make predictions or advise policy makers, who have more detailed and reliable data at their disposal.

“What I can say is that I think that acting early with interventions has had a significant impact on where the trajectories end up,” he said.

Also, he said, stay-at-home measures seem to be associated with a slower growth in cases; emergency declarations, not so much. That said, Parameswaran notes that stay-at-home is typically the final step in a series of measures, so the apparent effect may reflect any number of influences, including the greater public awareness that comes with stay-at-home orders. 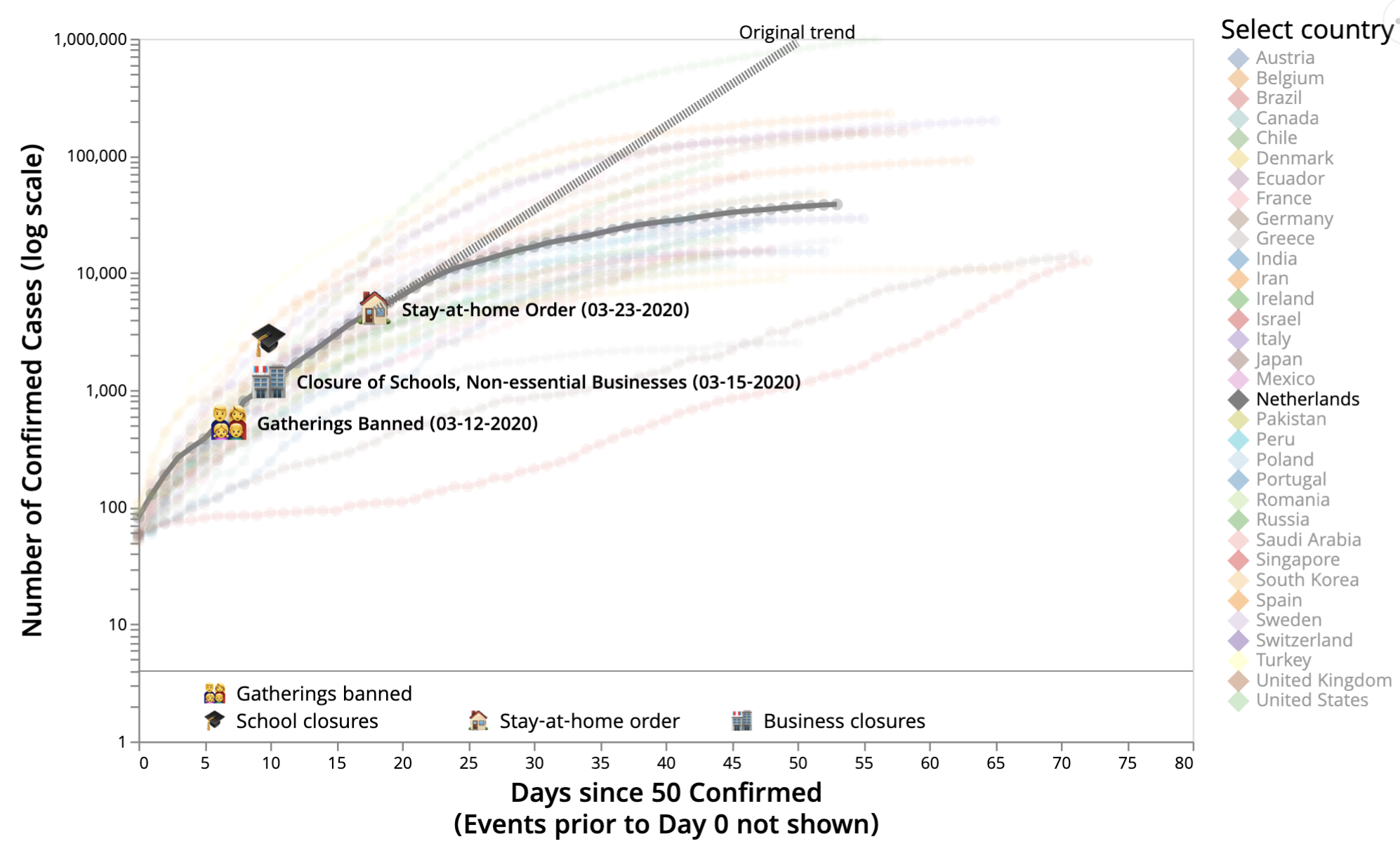 When the Netherlands enacted stay-at-home measures, the trajectory of new cases rapidly flattened. 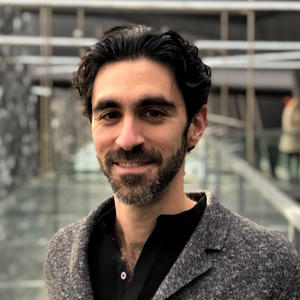 Whatever you believe about the epidemic, the effect of policies, you can pull up the graphs and see for yourself.

Ziad Obermeyer, a physician and acting associate professor of health policy and management at Berkeley’s School of Public Health, who served as an advisor on the project, observed, “What's powerful is that it's just presenting the data in a clean, simple way, and letting the viewer draw her own conclusions. Whatever you believe about the epidemic, the effect of policies, you can pull up the graphs and see for yourself."

The tool relies on intervention data gathered painstakingly by the COVIDVIS team, which also includes Aditya Prakash, associate professor in the College of Computing at the Georgia Institute of Technology and a CDC advisor, graduate students Doris Lee and Stephen Macke, and Stephanie Eaneff, a health innovation fellow at the Berkeley Institute for Data Science. The data collection and cleaning process is not always straightforward: the same intervention is often referenced using different terms in different regions. A stay-at-home order may be called a lockdown, a shelter-in-place, or even a healthy-at-home or safer-at-home order depending on who is making the declaration.

The team is releasing the dataset, with the hope that it may prove useful for computational epidemiologists building predictive models.

As states and regions begin to lift different restrictions in the coming weeks and months, the COVIDVIS team will be adding that information to the tool so we can continue to explore whether skipping that trip to the beach might make a difference.